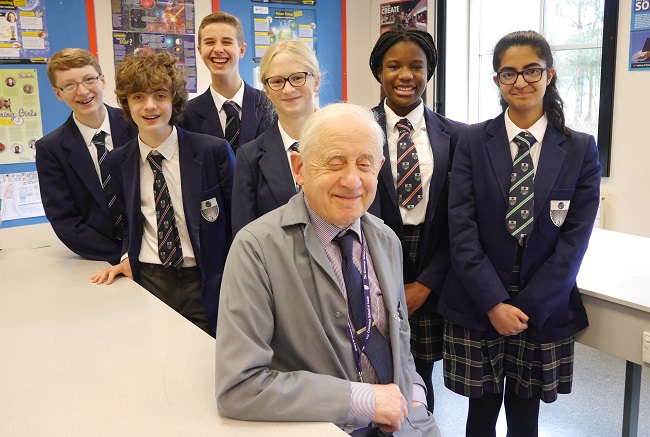 At the age of six Derek Fry read The Spangled Heavens: An Introduction to Astronomy by Lawrence Edwards and was hooked.

Now after half a century involved in teaching the subject, Mr Fry has been recognised with a prestigious award from the Royal Astronomical Society (RAS).

The RAS Service to Astronomy Award for 2017 is presented in recognition of ‘outstanding and exceptional work that has promoted, facilitated and encouraged the science of astronomy’. During his fifty-year teaching career Mr Fry has helped thousands of pupils achieve O-level, GCSE or A-level in Astronomy and Physics and has inspired numerous students to pursue careers in science. Indeed 15 PhD theses have been dedicated to Mr Fry by his former students who have gone on to postgraduate study in astronomy and astrophysics.

Professor Richard Bayliss, Professor of Molecular Medicine at the University of Leeds, said: “Mr Fry suggested that I might be interested in research at the interface of physics and biology – how right he was! He helped me to find a work placement at the University of Leeds, and now, after more than 20 years of study and working elsewhere, I have returned to the university, studying the structures of proteins close to where I first encountered this kind of science.

“He was so very kind and thoughtful, and he made every pupil in the class feel the same way.  His lessons were always so civilised!”

Elected to Membership of the British Astronomical Association in 1957, Mr Fry started his career in industry, before taking up his first teaching post at Mirfield Grammar, later Mirfield High School. He taught Physics and Astronomy there for 18 years and moved to Leeds Grammar School in 1987. In 1981 he was elected to Fellowship of the Royal Astronomical Society of London and in 1996 to Fellowship of the Institute of Physics.

At Leeds Grammar School, now GSAL, Mr Fry continued to include Astronomy in his timetable. Students study Astronomy on a voluntary basis, giving up half an hour of their lunchtime twice a week for two years. The subject has grown in popularity and currently there are 40 pupils, across Years 9, 10 and 11, preparing for GCSE Astronomy.

Mr Fry said: “I’m immensely proud to receive this award, however I regard it as a huge honour to share Astronomy with such committed and talented pupils, and really it is they who deserve all the credit.”