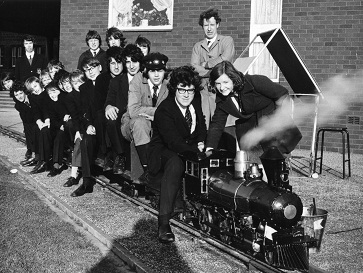 Old boys from Leeds Grammar School enjoyed a ride down memory lane when they were reunited with a model steam locomotive that was once an integral part of their life at school.

The engine ‘Thunderbolt’ was built by boys at the school in the late 1960s and became a regular attraction at events around Leeds during the next two decades, raising hundreds of pounds for charity every year. The school parted company with Thunderbolt in the early 1990s, and the engine fell into disuse until former pupil Mark Batchelor spotted it up for sale in 2011.

Thanks to Mark’s enthusiasm and engineering skills, Thunderbolt is now well on the way to regaining its former glory and made a guest appearance at the Annual Leeds Model Railway Society Exhibition at the school’s new home, The Grammar School at Leeds, Alwoodley Gates.

Mark said: “Although Thunderbolt is still a work in progress, it’s brought back many happy memories today. I hope to have it in steam ready for our next visit.”

A group of Old Boys gathered at the exhibition to reminisce and re-enact a photoshoot carried out by the Yorkshire Post in about 1975. One of those featured in this early photo was Tristram Hope, who remembers the lasting legacy of teacher Ken Rosewarne who had originally set the wheels in motion for the Thunderbolt project.

Tristram said: “Ken Rosewarne was a remarkable man, very practical and hands on in what was a very academic environment, providing a route for everyone to develop their skills and achieve success whether or not through the traditional academic route.”

Nigel Wild, one of the senior pupils in the original photo, added: “There was something for every age and ability of pupil – I was still in junior school when I first got involved. Ken was very keen to include everyone and nurture talents and the lads responded.”