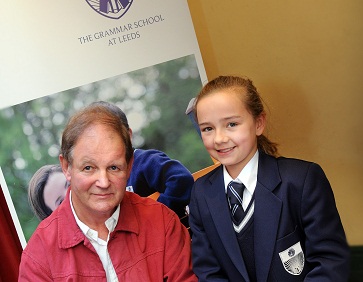 Acclaimed children’s author Michael Morpurgo topped the bill of children’s events at the Ilkley Literature Festival’s final weekend with a moving performance of his story based on the Christmas Day truce during World War 1.

Michael narrated ‘The best Christmas present in the world’, based on a letter written by a soldier to his wife after the famous football game in no man’s land on Christmas Day 1914, accompanied by Christmas music from a capella singers Coope, Boyes & Simpson.

The event was supported by The Grammar School at Leeds (GSAL), which is the major sponsor of the Children’s Festival at the Ilkley Literature Festival The partnership has allowed local schools to enjoy Festival events with writers Michael Rosen and Michelle Paver, as well as supporting the Festival’s provision of creative activities for young people.

Michael Morpurgo’s performance to a full house in the King’s Hall conjured up a nostalgic, wintry mood and left the audience of all ages deeply moved. Emma Hope, Year 7 pupil at GSAL, who is pictured above with Michael Morpurgo, said: “The story was really sad. Michael Morpurgo is a good storyteller because he makes everything so real.

“I got to talk to him afterwards and we had our photo taken. I have read quite a few of his books and they are mostly a bit sad, but they make you think a lot. I really enjoyed the event, and the singers doing songs in different languages helped to make it all come alive.”

Emma’s dad Tristram Hope added: “What an original and imaginative way to add colour and meaning to the narrative. Try as I might, I could not hold back the tears as the story unfolded.

“It is of key importance that we never forget the fearful sacrifices made in World War 1 and the many conflicts since, and do all in our power to prevent the same sort of meaningless conflict recurring. Morpurgo’s skills as a writer, narrator and historian were clearly evident, and it is reassuring to know that his literature will continue to convey a difficult but essential message to following generations.”