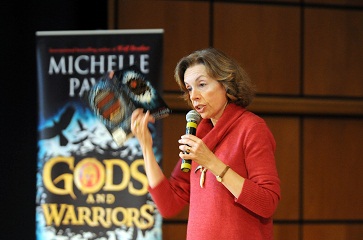 Swimming with dolphins, climbing an erupting volcano or fashioning a fish hook from deer antler is all in a day’s work for award-winning author Michelle Paver.

These are just some of the activities Michelle has undertaken in the name of research into her historical adventure stories for children, as she told an enthralled audience of pupils from primary schools in Harrogate and Rawdon and Years 5 to 8 of The Grammar School at Leeds (GSAL).

Michelle’s latest book ‘Gods and Warriors’ is the first of a series set in ancient Greece, and brings the hunter gatherer existence to life for the reader. Michelle said: “I have always loved the myths of ancient Greece and wanted to make it real, make you feel you are having the adventure with the character – so I do it myself! When a scene comes alive it’s the best feeling in the world.”

In researching the book Michelle explored the mountains of southern Greece, visited Crete (home of the book’s female protagonist), and met dolphins in the Azores. Her main protagonist Hylas lives on his wits using whatever he can find, and Michelle showed the children items she had made herself – string from nettles, tools from antlers and flint, and leather from animal skins.

The children now see the life of an author in a new light. As Ranjit Narasimhan, Year 7 at GSAL, said: “The talk was really good, Michelle gave us lots of ideas and surprised us with the amount of research that she does. I really want to read the new book now!”

Michelle Paver was speaking at GSAL, to pupils from St Peter’s Primary in Rawdon and Brackenfield School and Pannal Primary in Harrogate, before her appearance at the Ilkley Literature Festival GSAL is the major sponsor of the Children’s Festival and its keynote event with author Michael Morpurgo.