Bold as brass – an evening with Hilary Devey at GSAL 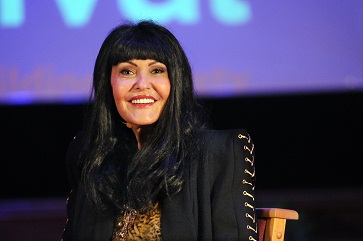 One of Hilary Devey’s earliest memories, as a girl of about 5, is being tipped off the sofa by two burly men who were stripping the family home following the failure of her father’s business.

As Hilary told an audience at The Grammar School at Leeds during the final event of the Ilkley Literature Festival 2012, from that time on her family led a rather nomadic existence in the pub trade with all hands to the pump, which she thought was quite normal until she came to reflect upon it in her memoir ‘Bold as Brass’.

Interviewing Hilary was Jane Beckwith, a documentary producer and former Calendar News journalist. Jane described the book as an “amazing rollercoaster” and this was borne out in conversation as Hilary related the childhood experiences which instilled in her the extraordinary work ethic that has contributed to her business success.

Hilary said: “I felt secure as a child despite the ups and downs, there was always lots of love and laughter. My dad was very charismatic, overpowering, garrulous, enigmatic, the life and soul, intelligent and an entrepreneur; one door closes and another opens was his philosophy – and mine.”

This resilience and positivity became evident as Hilary talked openly about her turbulent relationships and the challenges she faced as a single parent, all the while building a career for herself. The stimulus for branching out on her own was the need to be around more for her son. Noticing the inefficiency of the distribution industry with half empty HGVs traversing the country she revolutionised the industry with a central hub for coordinating loads.

Thus her multi-million pound business Pall-ex was born, which propelled her first to business success and then to media success including appearances on ‘Secret Millionaire’ and ‘Dragon’s Den’. Hilary’s new series ‘The Intern’ airs on Channel 4 in 2013.

Asked whether she enjoys the fame and fortune, Hilary made it evident that her campaigning and charity work is much more important to her. She said: “I don’t feel any different. I’d like to think that I will leave a legacy behind that is not necessarily financial, more an ethos of trying to assist and help people.”

The evening with Hilary Devey at GSAL came about through a new partnership between GSAL and the Ilkley Literature Festival, which this year saw GSAL become the major sponsor of the Children’s Festival.