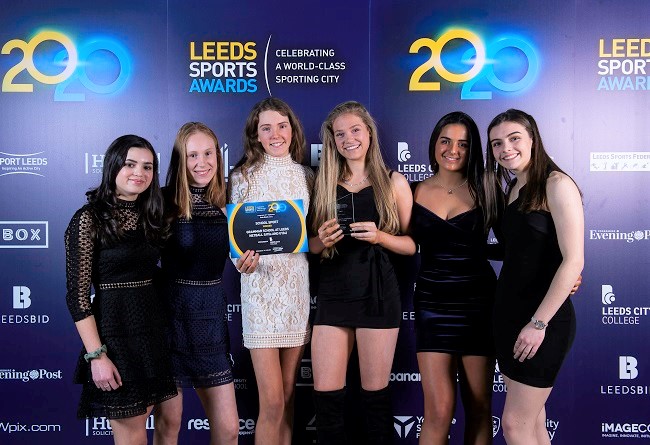 Netballers at The Grammar School at Leeds (GSAL) were on top of the world after winning an international competition last year, and now they have won recognition at the Leeds Sports Awards.

The teams were shortlisted in the School Sport (U18 or 18+) category of the Leeds Sports Awards, in recognition of their achievements. They were thrilled to be named award winners at the glittering awards ceremony in the First Direct Arena, hosted by Tanya Arnold of BBC Look North.

The Leeds Sports Awards celebrate sporting success across the city, and the contributions of athletes, coaches, clubs and volunteers, from elite to grassroots sport.

Molly, now Y11, captained the U15s at the world cup. She said: “It was phenomenal for our school to participate in that event and to come away with such fantastic results and experiences. It was also extremely emotional as both teams fought so hard throughout the tournament. To see all our extra practices lead to victory made it even more worthwhile.

“We’re ecstatic and overwhelmed now to be recognised among Leeds’ finest sportspeople and teams for our achievement.”

GSAL’s head of netball Cath Johnson said: “The awards evening was a fantastic opportunity to rub shoulders with all the top athletes, coaches and volunteers in the city. The girls were delighted to have their success at the World Games recognised, which was the result of many years hard work training together.”

There was little time for the girls to revel in their award; it was straight back to the business of training as they face the biggest challenge of the year in a couple of weeks. The U16s and U14s are through to the national finals of the England Netball Schools Championships, which will be played on Saturday 14 March at Stanborough School.

GSAL was also represented at the Leeds Sports Awards by eight pupils who are members of the City of Leeds Swimming Club. The club won the award for Young Club/Team Performance.