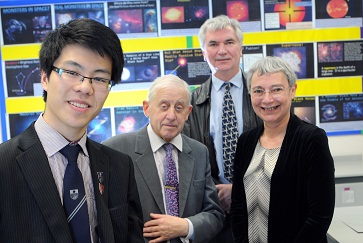 Forty years after leaving school, Leeds Grammar School’s (LGS) ‘Class of 72’ has clubbed together to establish a school prize in memory of a classmate who had been a rising star in the study of astronomy.

Peter Young was a brilliant scientist, achieving the top First in maths in his year at Cambridge and an MSc majoring in astronomy at the University of Texas at Austin. He completed his PhD at the California Institute of Technology where he became an associate professor in astronomy, until his death aged 26.

The Peter Young prize will be awarded annually to a student of astronomy at The Grammar School at Leeds (GSAL), thanks to the generosity of his contemporaries at school and Peter’s own father.

Peter’s classmate Irv Lee said: “At our recent reunion we were saddened to think that Peter never had the chance to be part of the exciting advances in astronomy and maths during the last three decades. We believe he would have become well-known on the world stage for his academic work, and we wanted to ensure his name lives on.”

Thanks to the power of the internet, Peter’s school friends were able to locate his sister, Frances Deadman, and seek his family’s blessing for the idea of a prize in his name

Frances said: “It is very touching that Peter’s classmates thought so highly of his talents. Astronomy was what Peter always wanted to do and as a founder member of the school’s Astronomy Club it is fitting that a prize for this subject is named after him.”

Frances represented the family at the presentation of the inaugural Peter Young prize during GSAL’s annual Speech Day in Leeds Town Hall. The recipient was Year 12 student Matthew Li, who achieved an A* in his Astronomy GCSE this summer. He said: “It is a huge privilege to be the first recipient of this prize, which brings more recognition to astronomy and its academic credentials.”

Astronomy has been taught as a GCSE subject at LGS and GSAL for 25 years by Mr Derek Fry, as an additional subject which students study out of normal lesson times. This summer 13 students sat the exam, between them achieving six A* and five A grades.