Curtain up on Harrogate Theatre’s new partnership with GSAL 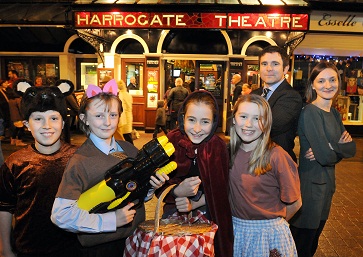 Little Red Riding Hood, three little pigs and a big bad wolf have raised the curtain on a new partnership between Harrogate Theatre and The Grammar School at Leeds (GSAL).

The fairy tale characters were portrayed by pupils from Pannal Primary School in Harrogate who, thanks to the new partnership, had taken part in an after school drama club run by staff from Harrogate Theatre’s education department. Their production of ‘Lost in Fairytales’, performed to an audience of family and friends in the Studio Theatre at Harrogate Theatre, was the culmination of ten weeks’ work with the theatre’s Education Workshop Leader Hannah Draper.

The collaboration between the theatre and GSAL means that more local primary pupils are set to benefit from drama workshops delivered in their own schools by Harrogate Theatre staff. The children will be encouraged to explore their imaginations, try new ways of creating characters and stories and experience performing in a real theatre with full technical support.

Harrogate Theatre’s Chief Executive David Bown said: “From Harrogate Theatre’s perspective this partnership is an investment in audiences of the future. We are honoured and excited to be working with such a first rate collaborator as GSAL and there are already significant outcomes emerging with regard to educational benefits and young people’s engagement with the arts.”

Kath Lupton, Key Stage 2 Leader at Pannal Primary School, said: “The drama workshops are a very enjoyable way for the children to learn about working together as an ensemble, supporting each other in working towards a shared end result.”

Kevin Carson, Senior Deputy Head (Academic) at GSAL, said: “I was very impressed with the children’s vocal and physical interpretation of the script and their inventiveness in devising their own stories. It’s clear that they’ve had fun and learned a great deal, and we look forward to working with Harrogate Theatre to bring the experience to more primary schools in the area.”