Double award nomination for The Grammar School at Leeds 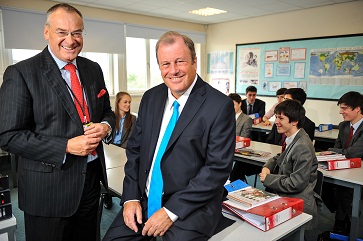 The Grammar School at Leeds (GSAL) has been shortlisted for two national awards, in recognition of the outstanding contribution of its Board of Governors and a collaborative project with primary schools.

The nomination for ‘Outstanding Governing Body of the Year’ at the Independent School Awards 2012 acknowledges the leadership of GSAL’s governors through three milestone events that have created the thriving co-educational school of today.

The first event was the relocation of Leeds Grammar School to Alwoodley Gates in 1997, followed in 2008 by the merger of the school with Leeds Girls’ High School. Six governors involved in the relocation remain on the Board 15 years later, while nine of those instrumental in the merger are still in post, emphasising the commitment and continuity that has been crucial to the school’s success.

Thirdly, both developments received a ringing endorsement with an excellent Independent Schools Inspectorate report in 2011. As well as noting pupils’ excellent overall achievement and personal development, the report commends the active interest taken by governors in supporting pupils’ welfare and academic progress and praises the school’s effective governance and leadership.

David Gravells, Chair of the Board of Governors, said: “I’m fortunate to work with a team of dedicated governors who have all contributed to making the key decisions that have led to the success of the school today. I’m delighted that their commitment has been recognised by this nomination.”

GSAL’s second nomination is in the category ‘Best Independent-Maintained School Collaboration’, for its innovative Speak Up! project that introduced original performance poetry to primary school children in and around Leeds.

The Independent School Awards, organised by the team behind Funding for Independent Schools magazine, celebrate excellence in the strategic and financial management of independent schools in the UK. Over 200 entries were received for the 2012 awards and the winners will be announced at an awards ceremony on 14 November.