Home > General > Fun is the goal at High 5 Netball Festival

Fun is the goal at High 5 Netball Festival 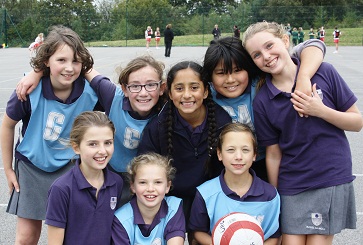 Year 6 pupils from thirteen schools in and around Leeds were on the ball as they got to grips with the five-a-side form of netball at the recent High 5 festival at The Grammar School at Leeds (GSAL).

High 5 netball is the entry level form of the game, designed to give 9 to 11 year old boys and girls a complete introduction to netball on and off court by rotating the positions. As well as taking turns in different positions on the court the children rotate in the non-playing roles of scorer, time keeper and centre pass marker to help develop their understanding of the game.

All relative newcomers to netball, the boys and girls came to GSAL to get a taste of playing a tournament in a fun and friendly atmosphere. As Mrs Laura Hemming, PE coordinator at St Joseph’s Catholic Primary School in Wetherby, explained: “The pupils start netball in Year 5 and are getting used to the High 5 rules, so a festival like this gives them the chance to meet and play against lots of new teams.”

Jan Hemsley, Junior Girls PE Leader at GSAL and festival organiser, said: “High 5 gives pupils the chance to play in more positions and enjoy a wider experience. It teaches versatility so players don’t get pigeonholed into one position.

“This festival is about fun, participation and enjoyment. It’s a chance to come and play a variety of schools in a non-competitive environment, so it’s a great introduction to a tournament situation for children who are relatively new to netball.”

Sophie Walker, Year 6 pupil at Moorlands School, said: “The High 5 game is more difficult because there are not so many options to pass to. We have to be quick on our feet and we’re learning new skills to transfer to the seven-a-side game.”