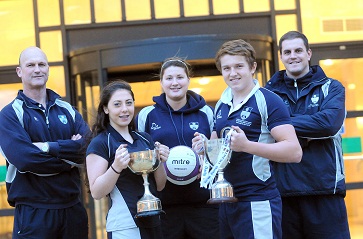 The Grammar School at Leeds (GSAL) has been named as the Independent Sports School of the Year by School Sport magazine.

This is the culmination of a stunning year of sporting achievements. Team highlights were the U16 netball team becoming the England Netball National Schools Champions and the U15 rugby squad bringing home the much coveted RBS Daily Mail Cup.

Individual highlights included Sixth Form student Hannah Starling diving for Team GB in the women’s 3m springboard at London 2012. She later made history by winning the first ever World Junior medal in the girls A springboard category for Great Britain with bronze at the World Junior Diving Championships in Adelaide, following up with a silver medal in the 3m synchro event. Fellow sixth former Gordon Benson represented Great Britain in the World Junior Triathlon in New Zealand.

To crown the students’ success, Head of Netball Cath Johnson was named Netball Teacher of the Year at England Netball’s Goalden Globe Awards 2012, having been nominated by GSAL’s netball players.

Many GSAL players in a wide range of sports are successful in attaining places in City of Leeds, county, north of England and national teams.  GSAL forges links with outside sporting clubs and university sport departments in order to enrich the students’ experiences.

Paul Morris, Director of Sport, said: “We have a very enthusiastic student body and a great support network of academic staff, who along with the PE department deliver a wide spectrum of sports which includes all abilities. The staff and older students provide great role models. We do push the students for victory and enjoy the rewards but it is the way they conduct themselves and the numbers involved that makes them successful.”

Hattie Grant captained the successful U16 netball team and has been selected to represent Great Britain in the Jewish GB Maccabiah Games U18 netball squad. She said: “School has always been there for me personally and for the team, giving us match and trial opportunities, and is really supportive.”