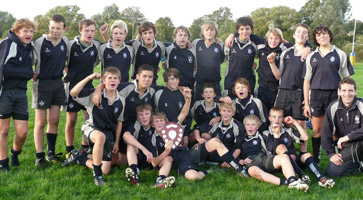 A team of Year 9 pupils from The Grammar School at Leeds is celebrating after becoming the Leeds Schools’ rugby league champions AND the U13 Yorkshire Cup holders for rugby union in the same year.

The youngsters, who have scooped the rugby league title in their first year of playing the game, beat Lawnswood School 8 – 0 in the final to lift the trophy.

They had previously seen off Bruntcliffe, Crawshaw, South Leeds and Corpus Christi schools to win their group, meeting Priesthorpe School in the semi finals. The team will now go through to the National Schools’ Tournament.

Their coach Phil Holmes, who teaches PE at GSAL and introduced rugby league to the school this year, said: “The boys were magnificent and played with guts, determination and discipline. They were great ambassadors for our school – and now for the city of Leeds.

“The school has a long tradition of rugby union, and to win both a union and a league trophy in the same year makes the team pretty special!”