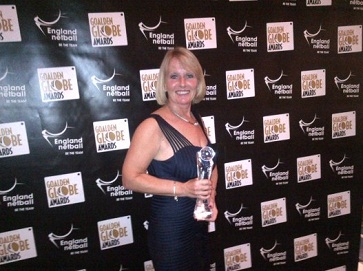 Cathryn Johnson, Head of Netball at The Grammar School at Leeds (GSAL) has won the Netball Teacher of the Year award at England Netball’s Goalden Globe Awards 2012 in Birmingham.

The Netball Teacher of the Year Award is designed to celebrate the achievements and efforts of a teacher who, as well as delivering netball in their school, has made an outstanding contribution to the development of netball beyond their statutory teaching responsibilities.

Since 1980 Cath has been an active volunteer in netball, including as the Leeds District Coach, Chairperson of Leeds schools netball and a member of the West Yorkshire committee. She has created links and partnerships with the National Governing Body, County, Superleague, Leeds Metropolitan University and Leeds University, and helped to support players developing through the talent pathways as players, coaches and umpires.

Cath has taught PE at GSAL for 13 years, nine in charge of junior PE and four as Head of Netball. Working with a team of coaches, Cath has taken GSAL teams to 10 National Finals in the past four years. Last season the U16 team won England Netball’s National Schools Competition, having triumphed in the U15 National Independent Schools Competition the previous year.

Cath was nominated for the award by the girls in the GSAL netball squads, and she said: “I am very proud to have received the award and honoured that the girls took the time to nominate me.”

The presentation of England Netball’s annual Goalden Globe Awards is an opportunity to recognise and celebrate the achievements and efforts of those who work to develop netball in schools, clubs and the community with players of all ages and abilities.