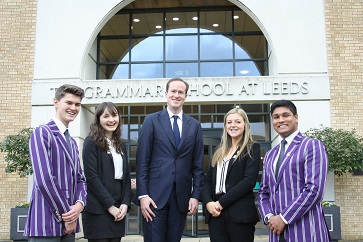 “Be the producer and director of your own movie” – this was the central message of political campaigner Matthew Elliott when he came back to school as guest of honour at Speech Day.

Matthew is an old boy of Leeds Grammar School, now merged with Leeds Girls’ High School to become The Grammar School at Leeds (GSAL). Speaking in Leeds Town Hall to an audience of GSAL parents, staff and pupils, Matthew said that he believes we should define success according to our impact on society rather than in material terms.

Matthew has certainly made an impact since leaving school – he is now the chief executive of Business for Britain which campaigns for changes to our membership of the EU, having previously co-founded the Tax Payers’ Alliance and Big Brother Watch.

His main message to pupils was that: “In life people should be agents of change; when you come to assess your life think about what difference you’ve made.”

Prior to the evening’s prize-giving in Leeds Town Hall, Matthew spent the day at GSAL where he met some of his former teachers and toured the school with the head boys and girls.

At LGS Matthew had studied A-levels in politics, economics and history before graduating from London School of Economics with a first class degree in government. His main extra-curricular interest was music – he sang in the school choir and played the organ daily in chapel, encouraged by Andrew Wheeler, director of music from 1989 at LGS and head of faculty at GSAL today.

Matthew also met up with Andrew Stodolny, who taught him politics in sixth form. Andrew said: “What I most remember was his gift for being concise and sharp in his essays. At first glance I would think, well, this work looks a bit brief but when I read it his arguments were invariably compelling, no-nonsense and strongly evidenced. No doubt he has played to this strength in his subsequent career.”

Matthew recalls other teachers who inspired his interest in political issues – his sixth form tutor Dr John Barclay who engaged his form in lively discussions at the time of the 1997 general election, and economics teacher Terry Elsworth who introduced him to Milton Friedman’s book Free to Choose.

Matthew is pictured above with the head boys and girls (L-R) Matthew Vautrey, Frances Pye, Libby Munro and Abhijeet Oswal, and below in his old seat at the school organ.