Hannah dives into the history books at Junior World Championships 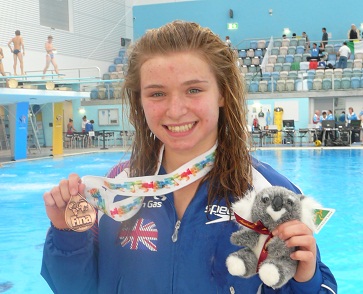 Leeds diver Hannah Starling made history when she won the first ever World Junior medal in the Girls A Springboard category for Great Britain – and then went one better with silver the next day.

Competing at the 19th FINA World Junior Diving Championships in Adelaide, Hannah, who is an Upper Sixth student at The Grammar School at Leeds, won bronze in one of the closest competitions of the championships so far. Her score of 457.55 in the 3M final placed her just behind USA’s Gracia Leydon Mahoney (463.10) and China’s Zheng Qulin (460.40).

“I’m really happy with my bronze medal,” said Hannah, who finished 13th in the same event on her Olympic debut in London this summer. “It was unexpected so I’m delighted. I was nervous in the prelims and I felt like there was some expectation because I competed at the Olympics so I decided to go in and just enjoy it, and it worked.”

Hannah went on to further success the next day by winning a silver medal in the 3M synchronised diving event with her partner Alicia Blagg. Both members of the City of Leeds squad, the two haven’t competed together for about six years. As a new pairing they had no expectations of a medal, so winning silver is a real bonus.

Hannah has been training for the last eight years with her coach Edwin Jongejans at the John Charles Centre for Sport in Leeds.