Independent School Award success for GSAL’s Board of Governors 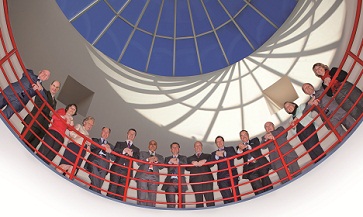 Three alumni of Leeds Grammar School have played a major role in GSAL’s Board of Governors winning a national award.

David Gravells, chairman of the board, Peter Sparling, who was chairman for 18 years, and governor Alan Barker have all been actively involved in events which led to the board being named  ‘Outstanding Governing Body of the Year’ at the Independent School Awards 2012.

The award is acknowledgement of the leadership demonstrated by GSAL’s governors through three milestone events which have created the school we know today. These events included the relocation of Leeds Grammar School from the city to Alwoodley Gates in 1997, followed in 2008 by the merger of the school with Leeds Girls’ High School and, in 2011, the endorsement of these developments with an ‘excellent’ Independent Schools Inspectorate report.

This report commended the active interest taken by governors in supporting pupils’ welfare and academic progress and praised the school’s effective governance and leadership.

David Gravells, Chairman of the Board of Governors, said: “I am immensely proud of this honour and convey my sincere thanks and gratitude to the Board of Governors who continue to contribute their individual areas of expertise to the school. Each governor has a demonstrable skill set and wealth of experience, which allows us to focus on different areas of the school and move ahead with new initiatives quickly and efficiently.”

GSAL was also nominated at the Independent School Awards in the category ‘Best Independent-Maintained School Collaboration’, for its Speak Up! project, which introduced original performance poetry to primary school children in and around Leeds.