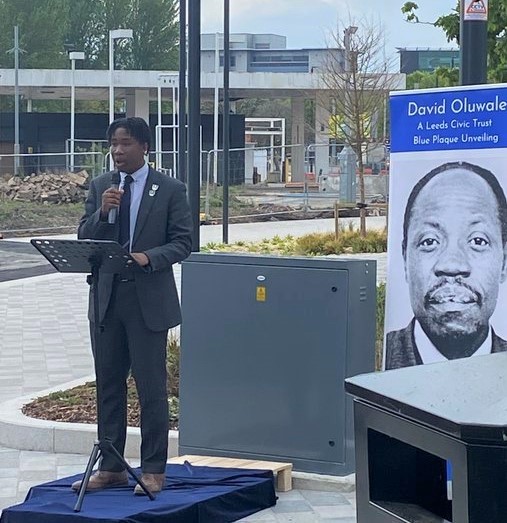 Joel, a Year 12 student at The Grammar School at Leeds, read his poem at the recent unveiling of a blue plaque next to the River Aire for David Oluwale, a British-Nigerian man who died after being chased by police in the 1960s.

Joel wrote his poem after participating in the Ignite Yorkshire project last summer. Along with a group of nine other young people, Joel created an audio walking tour called Locks to Legacies. The group researched, wrote and produced three podcasts about the city’s remarkable industrial heritage. The audio tour around Leeds Dock brings to life stories of the hidden history of Leeds’ canals and waterways and their historical links with slavery and the tobacco and sugar industries. The audio tour is available for members of the public to access with QR codes.

Joel was invited to read his poem at the unveiling ceremony alongside author and academic, Professor Caryl Phillips, patron of the David Oluwale Memorial Association (DOMA).

The blue plaque, which was installed by Leeds Civic Trust in April, was part of a memorial to David Oluwale, who suffered terrible discrimination and harassment by the authorities. Looking for a better life, David arrived as a stowaway on a cargo ship from Lagos in 1949. He found work in Leeds rebuilding the post-war city, but after being beaten and incarcerated, he suffered poor mental health and became homeless, living in shop doorways. He was last seen fleeing police in April 1969 and his body was recovered from the River Aire two weeks later.

His tragic life became an emblem of the Black Lives Matter movement. Following the murder of George Floyd in 2020, the Civic Trust reviewed the blue plaques scheme. They changed the criteria for blue plaques to include the stories of people who might easily be forgotten, but whose life marked an important point in history.

Joel said: “We found out about David Oluwale through the audio project. I am proud to be one of the voices to share his story with the people of Leeds.  What happened to him is still happening to a lot of people who look like me around the world.”

Leeds City Council dedicated a new footbridge over the river to David Oluwale in March as a lasting reminder of the importance of equality and inclusion.  A new sculpture from international artist Yinka Shonibare CBE RA, has been commissioned by the David Oluwale Memorial Association [DOMA] to honour David’s life. It will be unveiled as part of Leeds 2023, the city’s landmark year of culture.

In what was thought to be a deliberate act of discrimination, the original blue plaque was ripped off the wall hours after it was officially unveiled last month.  It has now been replaced in addition to many digital iterations now being displayed around the city to show unity.

Locks to Legacies is a partnership project of Ignite Yorkshire We Are IVE, Geraldine Connor Foundation, Heritage Corner and Canal Connections. The work is funded by the National Lottery Heritage Fund and Leeds Inspired.

Further information on the Locks to Legacies audio tour can be found on the Ignite Yorkshire website.

Image: Joel reading his poem at the plaque unveiling ceremony.