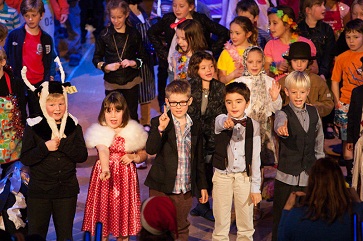 The Assembly Hall in Senior School was transformed into Kinglethorpe Village Hall as the children of Years 3, 4 and 5 gave a humorous portrayal of the intricacies of village life in the festive season.

Their production of ‘Countdown to Christmas’, written by Mike Smith and Wilf Tudor, led the audience on a merry journey through a week in the life of the village hall just before Christmas.

Like a soap opera condensed into an hour and 15 minutes, the show encompassed all the usual suspects of village life, introduced during the performance by vicar Reverend Jolly and his wife. The audience were on the edge of their seats as the drama unfolded.

Could the exercise club shed those extra few inches (and why were they bothering anyway)? Would Mr Shufflebottom get his drains fixed – with or without any help from Councillor Clot? Could the Silver Surfers get to grips with new technology? Would the leading lady of the Kinglethorpe Players settle for being the back end of Dolly the pantomime cow? Could the local rock band ‘Cop this’ pull in the crowds like their near namesakes ‘Take that’?

Why was it so vital not to upset the cleaners? Apparently something had happened to Fred, and any group that failed to tidy up after themselves might suffer the same fate. This threat left the cleaners with no work to do (not that they minded particularly).

All’s well that ends well – Fred turns up safe and well and the show ends with a big party.

With well-observed characters, colourful costumes, rousing choruses and dance routines the show had something for everyone. Head of Junior School Mr Lilley congratulated the children and staff for their hard work, which involved lots of work in class before bringing the show together as an ensemble piece.