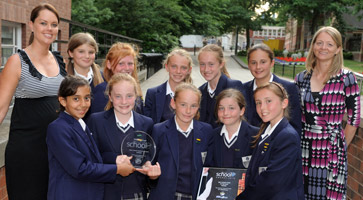 The U11 netball team topped off a triumphant first year of tournaments by winning the Yorkshire Evening Post Best In School Award 2010.

The team was shortlisted in the Best Sports Team category and was up against the U11 football team from Colton Primary and the Y6 netball team from Waterloo Primary, in Leeds.

The squad of Y6 girls finished among the top 12 independent schools in the country this year and also won the Leeds tournament, the Leeds League and the HMC north eastern tournament.