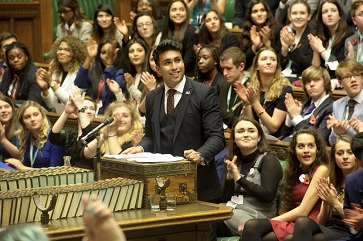 Minhaz Abedin is about to enter his fifth year as an elected representative despite being still in his last year at school.

The upper sixth student at The Grammar School at Leeds (GSAL) has completed two terms of two years as a member of the UK Youth Parliament (UKYP) for Leeds, and has now been elected to represent the whole of Yorkshire. In his new role he will be part of the Procedures Group which coordinates the development and activities of the UKYP, including its sittings.

Minhaz said: “The new role means I can now take a lead in facilitating the UKYP in towns and cities, and give something back after all the opportunities the youth parliament has offered me.”

The UKYP is made up of 600 members and deputy members who are elected by their peers to represent young people at a UK-wide, regional and local level. Since 2009 the UKYP has held an annual debate in the House of Commons and this year Minhaz had the honour of giving the closing speech.

In the Commons, members of the UKYP (MYPs) voted on which issues to prioritise in campaigning during the coming year. After debating five topics which had been voted for by over 950,000 young people, MYPs elected to prioritise mental health services and combatting racism and religious discrimination.

Closing the debate Minhaz said: “I was going to start this speech with ‘we made it’, but then I realised it was a bit better than that – 969,992 young people made it.

“Every person sat in this chamber has witnessed something historic today, so let us take a second to realise what we have actually accomplished. Today we represented the voice of nearly a million young people. Today we empowered a generation. Today, we made a difference.”

The debate was presided over by the Speaker Rt Hon John Bercow MP who thanked Minhaz for “everything you said and the inimitable eloquence with which you said it.”

Minhaz is studying government and politics, economics and English literature at A-level and hopes to read politics and international relations at university. While he sees his future career in politics, he said party politics is not where his future lies: “The UKYP has allowed me to see that I don’t need to be affiliated to make a difference.”