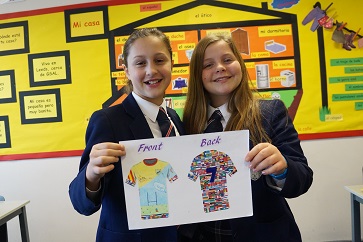 Three students from The Grammar School at Leeds (GSAL) will be picking up prizes next week for their Spanish inspired entries in a competition themed on the recent rugby world cup.

The brief for the regional languages and design competition, run by Routes into Languages at the University of Hull, was to design either a rugby kit or a sports water bottle, then write and film a TV advert for the product in the target language.

Year 8 students Olivia Courtney-Ashton and Georgia Pearson impressed the judges with the haka they performed to advertise their rugby top design featuring the flags of many nations and relevant phrases in Spanish. Olivia and Georgia won first prize in the year 7 to 9 category, while another GSAL pupil Daniel Ramos-Brown, also year 8, won joint third prize for his water bottle design.

Claire Barber, project manager, Routes into Languages – Yorkshire and the Humber, said: “We had some really excellent entries and it was difficult picking our winners. Some of the adverts were very amusing and contained a lot of excellent use of the target language. The actual designs of the water bottle and sports kit were also inspiring.”

Joanna Haynes-Boyd, teacher of Spanish at GSAL, said: “We had lots of other super entries from students in year 8 at GSAL, showing great creativity and languages flair. What a talented bunch of linguists we have in this school!”

The winners will attend a prize-giving ceremony at the University of Leeds on 10 December. Winners will receive a trophy and Amazon vouchers and there will also be vouchers for those in second and third places.

Routes into Languages is a programme funded by the Higher Education Funding Council for England to promote take-up in language learning, raise aspirations and attainment in secondary schools as well as in higher education and develop career opportunities for linguists.