‘Love will tear us apart’ – Romeo and Juliet remixed 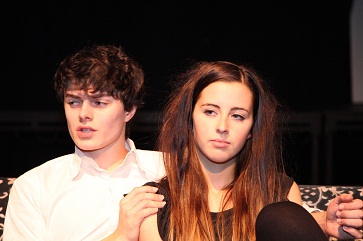 The theatre at The Grammar School at Leeds (GSAL) rocked to Embrace’s ‘One Big Family’ in the opening sequence of Senior School’s remixed version of Shakespeare’s ‘Romeo and Juliet’, as the feuding houses of Montagues and Capulets set upon each other.

The stark monochrome staging set the scene for ‘Love Will Tear Us Apart’, which updated the story of the ‘star-cross’d lovers’ and gave it a new vibrancy with pulsating music and dramatic lighting. The cast communicated their enthusiasm effortlessly to the audience, with seamless support from the backstage crew who were a vital part of this true team effort.

Romeo was played perceptively by Quentin Scobie, Upper Sixth, from his opening lines when he is full of unrequited love for the fair Rosaline, to his desperate death in the Capulets’ tomb next to his true love Juliet, performed by Ellie Mitten, Upper Sixth. Both players portrayed their roles with a maturity which belied their chronological age, yet which also brought out the youth of the characters.

Strong performances were evident in the whole cast but special mention must go to Caroline Taylor (Year 10) as the garrulous, yet loyal Nurse, Leah Weerasinghe (Upper Sixth) for a convincing and spikey portrayal of Lady Capulet, and Sheikh Momin, Upper Sixth, as Juliet’s brutal intransigent father, whose heart is broken when his daughter dies.

The father of the opposing family, Montague, was well conveyed by Leo Brosh, Upper Sixth. Friar Lawrence was suitably portrayed by a serious-faced and clerically-attired Jonathan Vautrey, Lower Sixth. Noah Ottman, Year 10, produced a very mature performance of the hot-headed Tybalt and the fight between him and Mercutio, convincingly portrayed by Robert Eagle, Lower Sixth, kept the audience on the edge of their seats. Peacemaker Benvolio was strongly played by Lower Sixth student Devon Miller, while Theo Guinness, Year 10, lent authority to the role of the Captain Prince. Juliet’s thwarted suitor, Paris was played well by Long Yip, Lower Sixth.

The show was re-written and directed by Head of Co-curricular Drama Mrs Emma Stokes, who said: “This interpretation uses the power of theatre and live performance to affect the audience. I have never been more proud of a cast and I believe that is a sentiment shared by the entire school.”