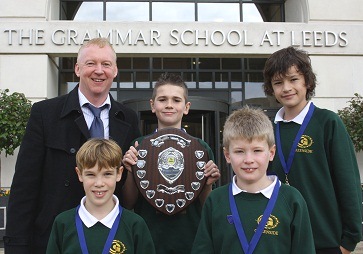 A team of budding mathematicians from Greenside Primary School in Pudsey worked out the right result for victory in the annual primary maths competition organised by The Grammar School at Leeds (GSAL).

The maths challenge is the brainchild of GSAL maths teacher Pat Brotherton and has gone from strength to strength in the five years since he introduced it at GSAL, when just 25 schools took part. 90 schools from across Leeds and surrounding areas took part in the preliminary rounds in their own school, with 45 schools reaching the semi-finals.

John Alexander, Numeracy Coordinator at Greenside, said: “The children did extremely well – although they weren’t even in the top three in the semis they took the attitude that today’s a new day and we’ll give it our best shot.

“I’m delighted that they have kept up the reputation of the school and made everyone in Pudsey proud. They responded well to pressure and used lots of different skills, working as a team, in pairs and on their own.”

Year 6 pupil Tru Grant said: “It was really good, the questions were challenging and put you on the spot.” Tru is pictured holding the trophy with team mates l-r pupils Henry Greenwood, Finlay Sanderson and Toby Marshall, alongside their teacher Mr Alexander.