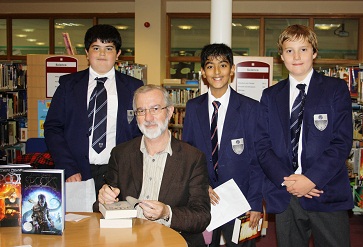 Persistence has paid off for former teacher Joseph Delaney, who found a second career as an author after 29 years in the classroom.

As Joseph, author of the chilling ‘Spook’s’ series, told Year 7 pupils at The Grammar School at Leeds (GSAL), he used to write for an hour or so before school every day and, despite many rejections for his fantasy fiction for adults, found success by reinventing his work for a younger audience.

He told the students how his first children’s book, ‘The Spook’s Apprentice’, came into being when he was looking back through notebooks he’d kept since the 1980s and found an idea he’d jotted down about the boggart reputed to live in his home village in Lancashire.

Giving advice for the budding authors in the audience he said: “You can get better at writing – you have to read a lot and make time to write. You need an idea so keep notes and write experiences down. I was sitting on the Spook’s Apprentice for 18 years!”

Year 7 pupil Matthew Giles said: “I thought the talk was really good and it gave me some helpful ideas about writing like collecting all your thoughts for books in an envelope. I’ve just started reading one of the books and I like the way the author sets the scene but then leaves a lot to your imagination.”

Classmate Haaris Ahmed said: “It was really interesting to hear what made Joseph Delaney write the books. I hadn’t realised that that he puts down what he hears in real life.”

Joseph’s school visits are not just about dispensing advice to aspiring authors, he loves the audience interaction too. He said: “Writing is solitary so I enjoy the chance to meet the audience, especially as children are so honest and show great enthusiasm.”