Title of GIS Centre of Excellence puts GSAL on the map 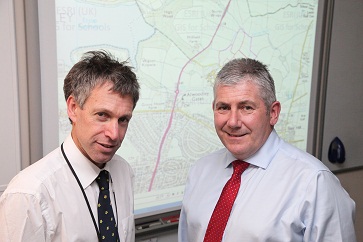 GSAL has been awarded the accolade of ‘Centre of Excellence’ by the UK’s leading provider of Geographical Information Systems (GIS), ESRI UK.

ESRI launched its Centres of Excellence programme in December, which recognises schools for innovation and expertise in their use of GIS technology. As a Centre of Excellence GSAL will be supplied with the latest version of the company’s software in order to explore and demonstrate its capability, with ready access to technical support from ESRI’s GIS experts, and will be part of a valuable forum for sharing best practice with other schools.

GSAL is one of just six schools named Centre of Excellence by ESRI UK, which comes after more than 10 years’ work with the company. During this time major strides have been made in the technology as it has adapted to accommodate the growing use of mobile devices.

Head of Science Mark Smith and geography teacher Steve Dunn have led the expansion of GIS within GSAL and have developed cross-curricular lesson resources that can be used by GSAL and other schools.

Mark said: “The nomination as a Centre of Excellence is recognition of our long track record in using GIS in teaching. Pupils respond well to learning methods that make use of technology and enjoy seeing the subject matter brought to life with the help of GIS. From tracking the spread of diseases, mapping world religions to devising transport routes there are many real life applications for the technology and our students leave school with unusually advanced GIS skills.”