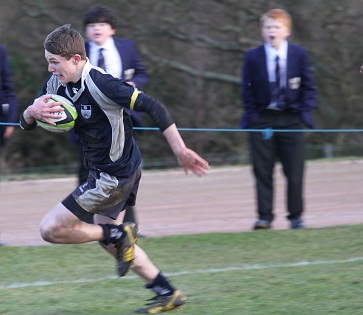 Hat-trick hero Tom Gorman sealed a quarter-final victory for The Grammar School at Leeds (GSAL) to put his team into the last four of a prestigious national rugby union competition.

GSAL were at home to visitors Whitgift School from Croydon in the quarter-final of the Daily Mail RBS Under 15 Cup. In a match that saw play at a level well beyond the years of the players on the pitch, GSAL took control of the first half with two tries from Tom Gorman (pictured), to lead 10-3 at halftime.

The second half saw a resurgent Whitgift on the attack, using a good forward pack to drive at the Leeds defence which proved resolute. As the game entered the last ten minutes, The Grammar School was awarded a penalty, a quick tap released the backs and with players tiring, Gorman found a gap and sprinted for the line. A superb burst of speed saw him round the remaining defenders to seal the victory. A successful conversion followed from captain Sam Ward to make the final score 17-3 to GSAL and a semi- final to look forward to.

Teacher Owen Edwards, who coaches the GSAL squad said, “Every player deserves a special mention. No one could be faulted and it was a performance to savour. Credit goes to the whole squad who have trained and played with heart and intelligence.”