Home > General > WordPress founder opens up about open-source at GSAL

WordPress founder opens up about open-source at GSAL 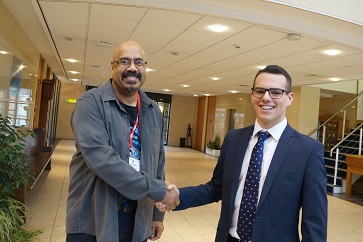 Although still at school, Sam Berson is already a successful web developer proficient in the use of the popular web development software WordPress.

The lower sixth student at The Grammar School at Leeds (GSAL) made the most of his connections in the industry by inviting the co-founder of WordPress Mike Little as guest speaker to launch a new computing society at school. Mike and his collaborator Matt Mellenweg created WordPress in 2003, releasing the software freely on the internet which led to its huge popularity. WordPress is now developed by a huge worldwide community and powers 25 per cent of all websites.

Thanks to WordPress Sam started programming for other people at the age of just 14, and has built up a web development business and a blog. He has even been called upon as a speaker at WordPress conferences – and it was this that brought him into contact with Mike Little.

Sam said: “I was really pleased when Mike agreed to come into school and talk about his experiences with WordPress and open-source software; it was a great way to get the ball rolling for our school computing society.

“The background information he shared about the internet and open-source software was a real eye-opener to a less directly profitable route into the industry – WordPress itself is a free product to download, but it has created a multi-billion dollar industry around itself due to its huge success.”

Mike said: “I hope I’ve inspired the students with an insight into the history of WordPress and open-source software and convinced some new coders to contribute to open-source!”

Despite already running an established business venture Sam is undecided about where his future career lies. After his A-levels in computing, business studies and French, he plans to take a gap year and pursue his other great passion, music production.