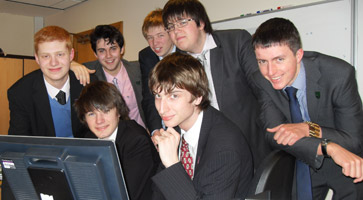 A group of innovative L6 students has set up a company to sell an action-packed computer game that they have designed and produced.

Vendetta has been formed by seven students under the LEAP enterprise scheme.

The boys, James Hill, David Levene, Alex Syme, Matthew Hill, Thomas Jenkins, Stephen Jones and Henry Cranston have been selling their game Alpha Project in school and at LEAP trade fairs.  They are also in negotiation with a games retailer to stock it, and will make it available through their own website which goes live in March www.visual-studios.com

The game is a single person shooter for 15-25 year olds and retails at £7.50.  It has 10 levels and is compatible with Windows XP. The GSAL students wanted to establish a business which was different to the traditional LEAP companies and decided to concentrate on a project which they were passionate about.

James Hill said:  “We are all keen gamers, so it seemed obvious to us to create and sell a product which we would want to buy.  We are delighted with the response to the game so far.”

The success of Alpha Project has inspired the team to extend their market by creating a game which will appeal to younger players and families.  Bingo Bongo is currently in production and will be available for sale in March.

Profits from the company will be split among charities chosen by each of the seven students including Help for Heroes, The British Army Benevolent Fund, Rethink, a mental illness charity, Breast Cancer Haven and local charities Martin House and St Gemma’s Hospice.