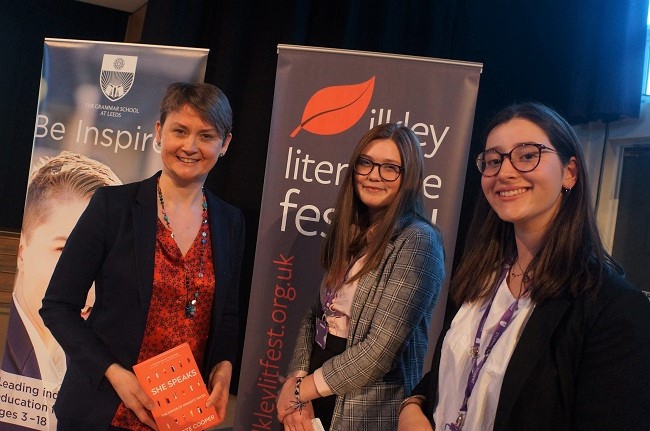 As MP for Normanton, Pontefract and Castleford for nearly 23 years, making speeches is all in a day’s work for Yvette Cooper.

Yvette credits her dad, a trade union official, with giving her the confidence to speak out. Now she has written a book celebrating women through history who have found their voices, despite the odds being stacked against them.

In a Q&A event for Ilkley Literature Festival, Yvette talked about the women who had inspired the book She Speaks: The Power of Women’s Voices. The interviewer was Professor Stephen Coleman, professor of political communication at the University of Leeds.

The Grammar School at Leeds (GSAL) hosted the talk, the second of Yvette’s engagements at the school. Earlier that day, GSAL Year 12 students, Amara and Robyn, interviewed Yvette for an audience of students from GSAL and three city high schools, Cardinal Heenan, Cockburn and Mount St Mary’s.

The speeches in the book are carefully chosen to reflect the diversity of women’s experiences, from across the world and through the generations, from Boudica to Greta Thunberg.

Researching the book brought home to Yvette how for centuries women have had to fight for a voice as others sought to silence them. Although the balance is tipping – today one in three MPs is female, up from just one in 10 in 1992 – women still battle to be heard.

Yvette said: “It felt to me we should redress the balance; it’s about power and authority and women are locked out of power if their speeches are ignored. There is slow progress but we are much closer to equality.

“Greater diversity, and not just of genders, matters because it brings a mix of experiences which means different perspectives and ideas are raised. The chamber no longer feels like an ‘old boys’ club’ now there are more women, who all speak in their own styles, with authority and command.”

GSAL is an official sponsor of the Ilkley Literature Festival, having worked in partnership with the festival since 2012.