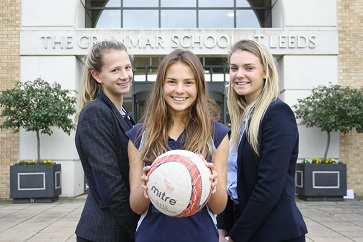 Three students from The Grammar School at Leeds (GSAL) are training hard to fulfil their dream of playing netball for their country.

Having already helped their school teams to win national netball titles, each of the trio now has her sights set on international competition after being selected to train with the England junior squads.

Rosie Harris, upper sixth, Hannah Gorman, lower sixth, and Lexy Shipley, year 11, were recommended for the national selection process by the Regional Performance Academy (RPA), part of England Netball’s performance pathway which develops promising young players from the age of 11 through to the senior national teams.

Following a week’s training camp in the summer, Rosie was selected for the England U19 squad and Hannah and Lexy for the U17. They have since attended monthly training camps, and will find out shortly whether they have made the teams for the 2016 international competitions.

Rosie earned three caps with the U17 at the Netball Europe tournament last season. She said: “It was an intense competition and playing alongside more experienced players really brought on my game. “

All three still play netball for GSAL. Hannah said: “Playing for school gives us great opportunities like playing in the national finals and lots of match play throughout the season.”

The youngest of the trio, Lexy Shipley, said: “I’ve been supported by the most encouraging coaches who have invested their time and energy into developing me. I was thrilled to have an England trial last March and it was a very emotional day when I found out I was one step closer to my dream of playing netball for my country. I’ll always be grateful to everyone who has helped me along the way.”

Cath Johnson, head of netball at GSAL, said: “It is an amazing achievement for the girls and our school – we are the school with the most players in the squad. They are very committed, training over 10 hours a week to play at the highest level.”